Getting to know... Mosquitoes 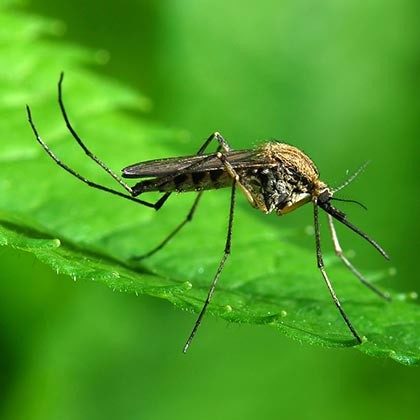 Mosquitoes are the deadliest animal on the planet.

More deaths are attributed to mosquitoes than any other animal on Earth, including humans. Mosquitoes may carry any number of deadly diseases including malaria, dengue fever, yellow fever and encephalitis. Mosquitoes also carry heartworm, which is deadly to dogs.

Malaria infects approximately 198 million people each year and causes approximately 500,000 deaths. West Nile Virus can cause flu-like symptoms or more severe illness. Dengue fever, nicknamed Breakbone fever for its debilitating symptoms, has grown in both frequency and mortality becoming one of the most rapidly spreading viral diseases in the world. Eastern Equine Encephalitis is among the most serious of diseases that affects the nervous system and can lead to death. Chikungunya (meaning “that which bends over” because of the symptomatic joint pain associated with it) is a viral disease spreading through the Caribbean.

Not all mosquitoes bite people.

Of the roughly 2,500 species in the world, only several hundred are known to bite humans. Mosquitoes are found everywhere except Antarctica.

During peak breeding seasons, Mosquitoes outnumber every animal on Earth except for termites and ants.

Water is their breeding ground.

It's true, some people are more attractive to mosquitoes.

No one is sure what causes the varying degrees of attractiveness, but mosquitoes are more drawn to some people than others. In general, they are drawn to the carbon dioxide, lactic acid and octenol in our breath and sweat which signals that a blood meal is near. Some claim that people who drink beer are more attractive to mosquitoes.

An itchy bite is an allergic reaction.

Mosquito saliva contains an anti-coagulant that allows the female mosquito to more easily suck your blood. An itchy red bump develops from an allergic reaction to the saliva.

Mosquitoes are most active in the cooler hours, so you're most vulnerable to bites when they are at their peak activity.

What is that buzzing sound?

Mosquitoes beat their wings 300-400 times per second. The sound you hear when a mosquito is near is the sound of beating wings.

Along with DEET, picaridin, and some lemon eucalyptus oil products repel mosquitoes. Use these according to label instructions. You can also wear protective clothing, such as light-colored long pants and long sleeves, to avoid the bite.

You can take steps to Mosquito-proof your home.

Open doors are an invitation to flying insects. Screens on doors and windows will help deter mosquitoes, just make sure they are in good repair without tears or openings.

Of the states in Home Paramount's territory, it comes as no surprise that Florida is home to the most species – 80 in all. West Virginia has the least with 26 reported species. This may be a consideration if you're deciding between summer at the beach or in the mountains.

Fish and Dragonflies feed on mosquitoes.

Mosquitoes have a history with us. U.S. Presidents

George Washington, Abraham Lincoln, Theodore Roosevelt and John F. Kennedy all suffered from malaria, as did Christopher Columbus, Mahatma Gandhi and Mother Teresa. Genghis Khan and Alexander the Great reportedly died of it. More soldiers in the Spanish American war died from Yellow Fever than from enemy engagement.